CDA-Projects in Misir Apartments Building opens the season with young artist Guido Cassaretto’s new solo exhibition. The exhibition titled Extrasystematic Correlations displays the ‘image reflections’ of the systems – of the relationship between individual and space – composed through mathematic-based programs.

Figures and elements in this context that are transferred with a special processing technique on transparent plexiglas, - according to the artist- do not go beyond being a simple figure;  – they “do not exist” as a being, phenomenon. These works created by a production system that is centered on mathematics and operations, simulate the relation of mathematics with nature’s system rather than simulating nature’s system itself.

The instinct that the viewer creates in their image memory brings the works close to the physical world system rather than an image made up of mathematical base. The transparent surface that is chosen as the material is the only element that points out the nature’s system with its own specific (non)quality. While the artist makes the audience perceive they are made up of a computer based (digital) system when they see the images, at the same time he lets them conflict with their own process of creation by feeling sympathy for the elements in it.

The transparent material, about which the artist thinks that a manufactured surface first of all points out itself, transforms the exhibition into a special experience. The surfaces carry the figure-individuals and the space they are in as well as directly associating with the gallery space by perceiving it as a basic layer. Extrasystematic Correlations, not only visually, but also with its power to affect the perception of the audience in the third dimension, gives the audience the opportunity to experience the exhibition from within and establish their own correlations by becoming an indirect element of this mathematical equation.

The exhibition could be visited between September 15th-October 20th in Misir Apartments Building.

Guido Cassaretto Born in 1981, the artist went to Bologna Fine Arts Academy and Mimar Sinan Fine Arts University. The artist has four solo exhibitions so far, and Extrasystematic Correlations is his first solo exhibition at Cda-Projects. The artist joined many national and international group exhibitions. He lives and works in Istanbul. 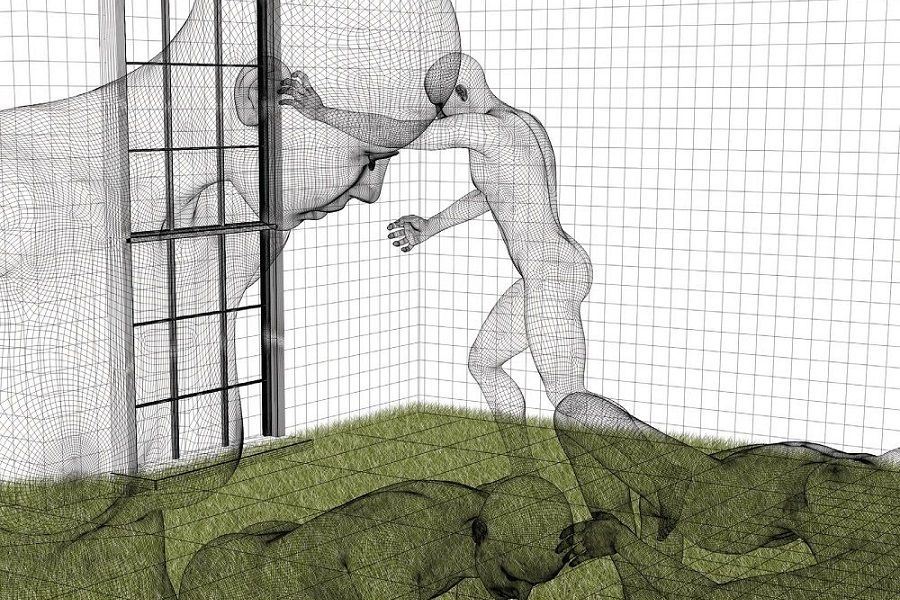