Residuals of Gravity presents a series of new works and a previous installation at CDA Projects.

The artworks capture narratives on the edge of an inevitable disaster or calm moment witnessing the aftermath. In the series “Infusions and Impossible Things”, domestic interiors and juxtaposed objects present a tranquil moment on the edge of being engulfed by fire or water.

Bellotto’s process of collecting images from the virtual domain and other found and capture photographs, weave into narratives within the exhibition. This body of work is inspired by stories both found through an assortment of on-line media channels, personal history and other travels, and how they intertwine in memory and become something that it was not. She is interested in how the images may trigger memory, and oscillate between the imaginary and shattering realities of the everyday.

The new works were inspired by the relic imagery found at the “Sanctuary of Castelmonte”, which is located in the Carnia mountains in Italy. Painted relics on tin archive various accounts of near-death experiences. Narratives, inspired by these accounts on the edge of disaster, are brought back into the exhibition and encapsulated in a tin box, which reveal something more than a picture-postcard. They preserve a collection of life’s edge, whether on the brink of catastrophe or the calm in the aftermath, and become a source of hope, warnings and cathartic resonance.

A video installation where appears a tower, is shaped by the tragic narratives which towers are known for. Based on the lighthouse—historically used as a guiding light for seafarers, concentrates on the edge of its vantage point and inevitable tragedy.

The Installation WAVE introduces an upside down photographic landscape of a 14th century tower that remains from an old town in Lake Resia, a man-made lake on the border of Switzerland, Austria, and Italy. The town was flooded to construct a dam for energy. Videos and light submerge the space with lenticular photographs of upside down electrical posts and satellites. Lenticular is the technique used in blinking eyes postcards. As a viewer passes by the photographs the images change revealing, like a keyhole, another dimension. The video, “Buoyancy,” further propels the work into a state of flotation, questioning the space, which is neither up nor down, but resonate moments that appear and disappear.

Janet Bellotto is an artist from Toronto, who splits her time teaching in Dubai. Bellotto’s artwork encompasses sculpture, installation, photography, video and performance. Water flows through her work: oceans and waves, submersion and reflections, in-between states that are fluid and aqueous. Her installations scintillate and radiate as they weave through narratives that are seductive and play between illusion and a shattering reality. Her practice also encompasses curating and writing, and engages in projects that promote cultural exchange. Her work has been exhibited in a variety of collective, group and solo exhibitions in Beijing, Dubai, Istanbul, New York, Mexico City and Venice. Recent exhibitions include: 2013 The Four Horsemen of the Apocalypse, DeLuca Fine Art Gallery, Toronto; 2012 Nile Blue, Red Head Gallery, Toronto; Aquatica, Harvey Nichols, Dubai; 2011 Untitled Original, CDA Projects, Istanbul; 2010 – 12th Cairo Biennale, Egypt; Drowning Ophelia, Stratford Gallery, Stratford.

A catalogue accompanies the exhibition. 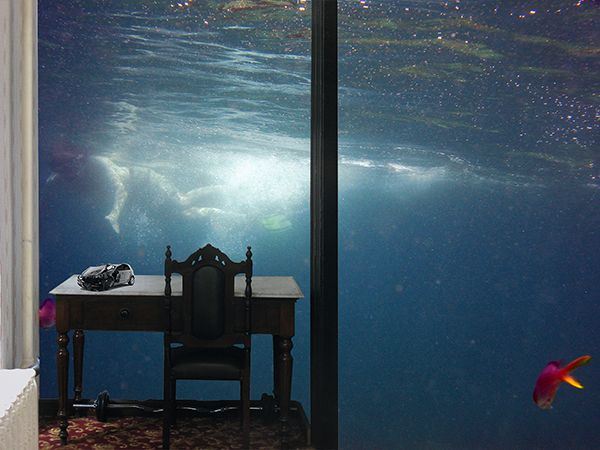